This chart below explains why we have continued to be at least 95% invested since the end of May.  We are currently 98% invested and holding just 2% cash.

I have been sharing updates of this chart for the past few months with those invested in the Edge Fund.

The weekly chart of the ASX All Ordinaries shows that breakout above the top of the arrows at the 5500-odd point level.  The time between the arrows represents a nine month (October to July)  sideways consolidation. 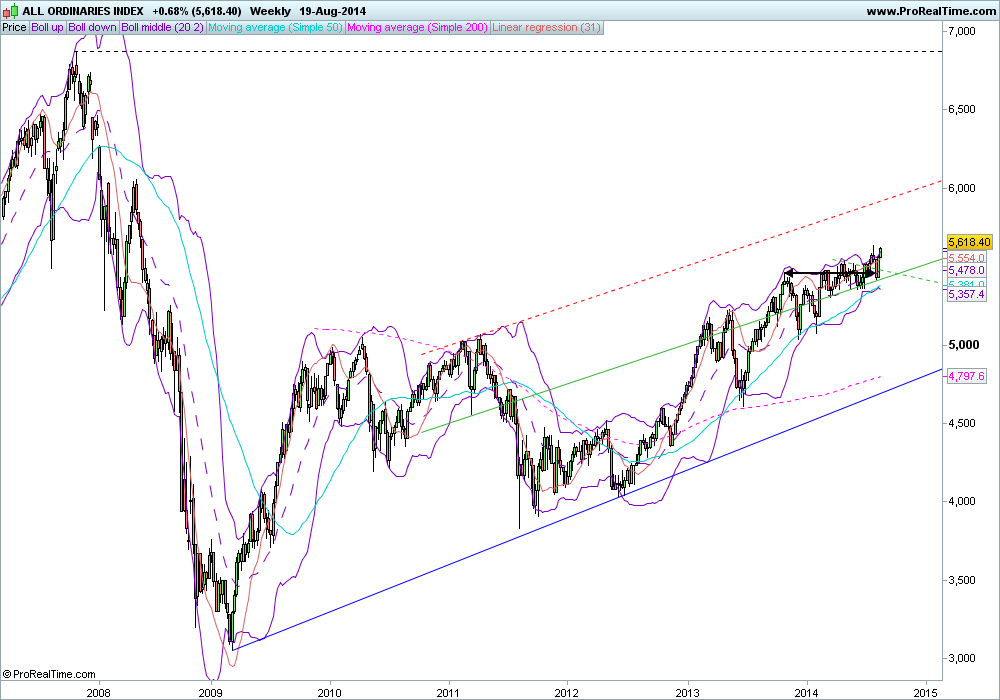 Today’s investors are living in unprecedented times
In 1994, the US market endured a similar sideways movement for a little over 12 months prior to enjoying a bull market run for more than a year.  However, in Australia, we have to go back to the 1960’s to see a sideways consolidation of the same duration.  And, yes, after that long consolidation in the 1960’s, what followed was over a year of strong gains.   I doubt many people reading this were actively investing in the 1960’s which means that today’s market participants are certainly operating in unprecedented times.

The longer we stay above that 5500 breakout level on the ASX All Ordinaries (about 5540 is the equivalent on the ASX200) the higher the probability of this upside continuing.

Cash on the sidelines is finding a home
With record low interest rates forcing people to look beyond bank term deposits, it seems enough of this money is now collectively finding its way into the share market.

The current consensus is to hold 30% cash
I have observed a number of fund managers over the past couple of months on business TV programs such as Switzer and CNBC talk about the market being “fairly priced” or “fully priced”.

These fund managers have cited this ‘fully priced’ reason to hold cash levels of about 30% as a consensus. Holding the consensus view may be safe on their part because if everyone else is doing it (holding cash), than they won’t look bad relative to their peers.  But, I do wonder if holding high levels of cash at this point is in the best interest of their clients, those who have invested in such funds?

I have only seen one fund manager on these business programs holding just 5% cash to his credit, but a couple others holding 40% cash and one fund holding 50% cash!!!

Holding cash in a rising market will likely equal under performance

So, while fundamentally, the rationale of these fund managers is correct to hold higher levels of cash.  In practice, given the positivity now shown on the charts as an aggregate of the sentiment of all investors in the market place, it is likely those holding high levels of cash will under perform the market until the positive sentiment drifts away.

A combination of the two will probably prevail.  I think their is a distinct possibility that those chasing the market higher and trying to find ‘pockets of value’ will most likely fuel higher share prices in the months ahead.

Waiting for opportunities or an opportunity cost?
Another rationale given by many fund managers is that they are holding cash waiting for opportunities. I use to subscribe to that way of thinking because everything I read and heard from experts told me this was the best approach.  Fortunately, I am no longer on that band wagon.  Here is why……

Perhaps, just maybe
And perhaps, just maybe, those holding cash waiting for ‘opportunities’ have just missed the best opportunity they may have for a year or two to buy the cheapest stocks on dips during the last nine months.

Monitor and Adjust instead of Forecast
Assuming the breakout holds, I hope I am good enough to stay the course until the market tells me the probability of good things continuing is coming to an end.  It could be a week, a month, a quarter or a year from now.  I have some views that it could be well into 2015 at this stage but would prefer to ‘monitor and adjust’ rather than stick to a forecast. I plan on holding until the market profile morphs into something that looks more like January 2008 or May 2011.